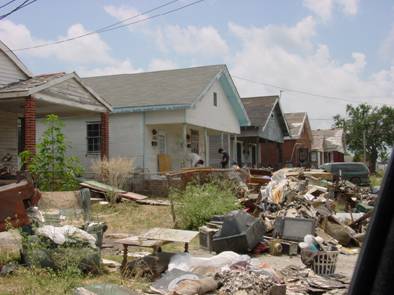 Greetings from the Big Not-So-Easy.  We have finally had the opportunity to bring First Medicines to the victims of Katrina.

I taught a Hypnosis class near Denver in April.  As luck would have it, one student, Brenda Fister, was already coordinating a trip down here to visit her daughter and son-in-law.

They have been helping to feed residents and volunteers in St. Bernard Parish since December.  Brenda arranged for us to come to the relief camp, Emergency Communities (emergencycommunities.org) to offer stress relief interventions for those whose load has been reaching a breaking point.  There have been many reports of stress-related heart attack deaths and suicides.

Lenise and I arrived a week ago and met Brenda here.  Our first mission was to assess the conditions and resources to determine what would be the most effective action.   We conducted a workshop to teach the volunteers a simple relaxation method based on a short script I had written entitled “The Five Minute Miracle.”  Since that workshop several attendees reported that the simple methods learned had helped them to achieve richer sleep despite roaring refrigeration truck generators and rabid bugs.

In addition to distributing household supplies, dry goods, and clothing, Emergency Communities serves over 1,000 meals each day to the residents and volunteers working to renew this ravaged community.  We discovered that as folks arrived and lined up for meals, we could offer a short stress relief break. We invite them to rest in our portable recliner, listen to a recording of “The Five Minute Miracle” on headphones and receive a gentle hands-on treatment designed to calm and stimulate specific points I have learned in my acupuncture training.  I also played a little bit of flute music when appropriate to give some added calming action.  Upon completion of the process, participants were given a copy of the script on a postcard to repeat to themselves or read to anyone else they encountered with need.  Some were given copies of the CD and others were also given a twenty-bead strand of Mardi gras beads and instructed in the Coue Method (Every day in every way I am better and better).

The outcomes were phenomenal, beyond our wildest expectations.  After this simple nervous system reset, respondents reported the immense calm they experienced, often returning the next day to report that the benefits were lingering or take another rest in the chair.

Beyond giving treatments and conducting workshops, we have spent a lot of time talking with the residents about their experiences during and since Katrina’s assault.  In some cases, the ordeal of dislocation and abuse has been greater than loss of home and property.  Many are just returning to “muck out and gut out” their homes. With weariness they stopped by “EC” each day to eat, gather supplies, connect with neighbors, or just tell their story to someone who cared. 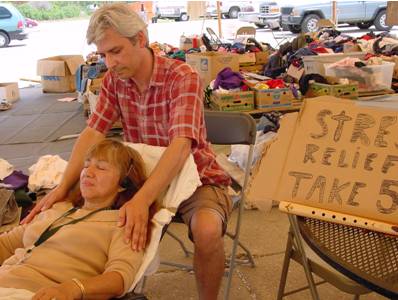 The scope of devastation is unfathomable. Nine month since the disaster, the area still looks like a war zone.  Each day I drove five miles from the downtown freeway exit through pile after pile of rubble, sometimes broken houses cast into the roadway or toppled like monopoly houses against trees, poles, or each other.  Cars with shattered windows are stacked and scattered like dominos, still gray with the muck that consumed and carried them.  In the zone near the levee breaches it is even worse.  On certain lots only slabs or concrete stairways remain.  Trees are toppled, houses tipped or crashed to rubble.  This scene spreads out in every direction from the levee breach and is repeated in other areas of the city we toured.

One day at camp a woman commented that there were no birds or squirrels in St. Bernard Parish.  Only then did I note the eerie silence that surrounded us. Occasionally, while driving through this apocalyptic landscape a convenience store or gas station may be open, but most businesses lie in ruin like the majority of homes that have no trailer parked in front or signs of life on the premises.  The people reflect the environment: vacant, scarred, and yet enduring.

While here I have also connected with the Jefferson Parish Sheriff’s Department (my Aunt is a Lieutenant) to provide some manner of stress relief to the critical service and security sector.  We have made an agreement to provide CD’s of “The Seven-Minute Stress Solution” along with a short handbook on stress management and contact info for live resources.  I will begin fulfillment of this project when I return to Oklahoma City, as well as update the First Medicines Website with some of these resources. 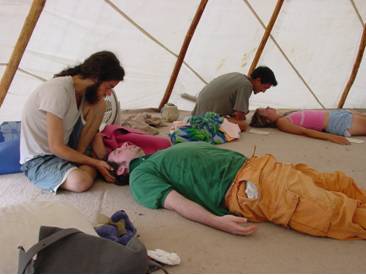 The work here must go on.  I have been fortunate to be able to train healing arts volunteers here in our methods and the “Stressed? Take 5…” program will continue to be offered at the EC camp as it moves from St. Bernard to Plaquemine Parish later this week. I encourage you, if it is in your heart, to come to this place or other hurricane impacted areas to help restore the lives and communities.  You will be welcomed, embraced, and changed.

As always, I invite your financial assistance in this work.  We have carried most of the cost of this trip, but have assistance from The Tenth Street Community Fund in Oklahoma City for which we are deeply grateful.  The CD project can be realized for just a few hundred dollars, but can touch many, many lives.  We are seeking grant funding for ongoing work, but every private dollar of aid truly makes a difference.  If you want to help First Medicines, call me at 888-392-9663 or visit our website First Medicines.org.  To help Emergency Communities, visit emergencycommunities.org.

Thank you for all your support and encouragement.  Kind words really strengthen our resolve and commitment to continue this mission.  I look forward to sending further updates as this work moves forward.

Timothy, Lenise, and all others here

We conducted our first program today, a workshop on basic hypnotic method for ten volunteers working in various capacities to assist residents of St Bernard Parish who come to the Emergency Communities camp for meals, clothing, canned goods, and caring ears.

Following the workshop we strolled around camp a bit and found ourselves at the large dome dining tent in search of water. As we entered the area, a thin man in his late seventies turned from his seat to greet my colleague Brenda.  “Hello Andre,” she said, “this is my friend Timothy.”  Instead of reaching a hand to shake, he lifted a sweating cold bottle of water from the table and quiveringly presented it to us asking “would you please open this for me?”  Brenda opened the bottle and handed it back to him.  He poured some of the water into a cup of ice and pink beverage, while offering thanks. 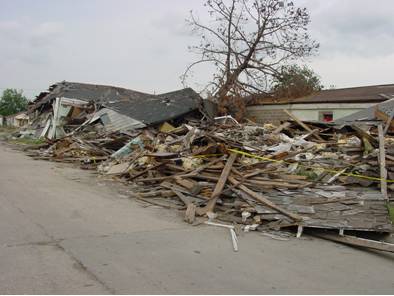 I sat at the table beside him and he began his report.

“I said unto the Lord, it’s just like Europe.  I was there; I saw it, devastation.  The man said ‘Now we’ve cried all our tears, our eyes are dry and it’s time to return to our work. Let each body that is able pick up a brick and take it to the man who is putting them in place.’ And brick by brick, each was put in place and Europe was rebuilt.”

“Now it is our time. I lived through Betty and saw the waters rise.  Now with Katrina, the waters have come, and the oil tanks broke and spoiled my whole town.  I had that house built in 1965 and paid my $110 each month to own it.  From the outside it is fine. I’ll clean it and take away the spoilt materials and make it new.  I’ll move in to the front room and my grandson will raise his two boys in that house, our home.”

Andre told me so many things in that hour as I sat and listened and learned.  He told me of the GI Bill of Rights, where to go fishing without having to drive 300 miles, how to cook and eat crawfish and lobster, and the legal wranglings around a catastrophe. While he spoke the fire rose within him and his dimmed eyes grew bright and wide with his grand gesturing as he passed along his wisdom like a trove of precious gems.

When we finished it was time to go.  As I exited the tent, the local residents were lining up for dinner outside the tent.  I looked down the line at faces and feet and wondered about their stories and how and when they would be told as well to whom.

I sat to eat my lunch, which had been coverd to protect it from the wind while I gave treatments to a resident and his son.

As I ate an elder gentleman who was visiting at the next table approached where I was sitting and took a seat across from me in a casual, neighborly way.  He began to tell me what he had been going through, how he had evacuated the area and rented a house nearby only to be gouged by the landlord. He then reported how he had wrestled during the flood to get out of his house, how he had only a pipe in the attic to chip away at the roof “splinter by splinter” for eight hours as the water rose around him and his sister. Finally he made a hole large enough for himself and his sister to crawl through.  A coast guard boat came by and took his sister, as there was no other room, and later he was rescued.

Evacuated to Baton Rouge, there he witnessed the horrors of rape, robbery, and murder in the shelter and the streets.

I offered him a treatment. He accepted and gave gracious thanks for the relief he received.  When he told me that his brother was recovering form a massive heart attack he experienced before the storm, I produced a short strand of the mardi gras beads I had prepared in my pocket and instructed him in the Coue Method.  I gave cards and beads for his sister and brother also.

He apologized for interrupting my lunch.  I accepted his apology and thanked him for his

interruption.  His name is Raphael Luna.  I asked if I could call him Don Raphael and he chuckled and said that was too much respect for an old man like him, but his teary eyes as he walked away revealed the value of just such regard. 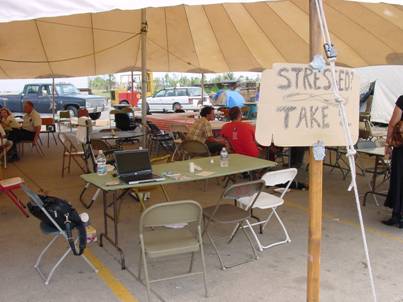